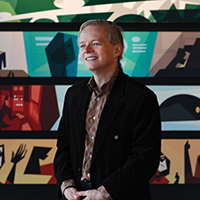 Chris became RenderMan Business Director at Pixar in 2005. RenderMan is the innovatory photorealistic 3D rendering software, developed by Pixar, behind films such as Toy Story, Monsters Inc and Harry Potter. During his time at Pixar, Chris developed the use and reputation of RenderMan to an industry standard. RenderMan is now employed in most contemporary feature films, and is considered as a foundation of the modern revolution in visual effects and animation.

Film industry applications managed by Chris have been awarded two Academy Awards for technological innovation and he is credited in 11 feature films, including Up, Brave and Inside Out.
Chris is currently Senior Director for Product Management at HOVER Inc, a San Francisco based company that is developing a disruptive new 3D visualisation technology for homeowners everywhere.