Listen to the lecture from John Manzoni, Chief Executive, Civil Service as he delivers a talk as part of the Bristol Distinguished Address Series. 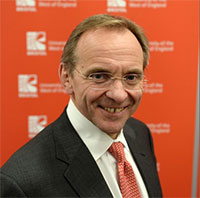 In his address, John Manzoni discussed the various challenges and opportunities to build a Civil Service fit for the future. One that’s smaller, more collaborative, more skilled, and ultimately able to deliver for 21st Century Britain.