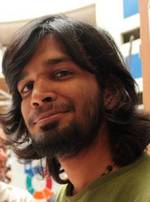 Achintya Rao is a PhD student at the Science Communication Unit since January 2014, under the aegis of the CERN (European Organisation for Nuclear Research) Doctoral Student Programme. His research focuses on outreach and communication practices in the field of particle physics, specifically in the context of CERN. He is also a professional science communicator for the CMS (Compact Muon Solenoid) Collaboration at the Large Hadron Collider, and is based in Geneva, Switzerland.

Achintya’s PhD thesis is focused on the CMS Experiment at CERN, a scientific collaboration of over 3,000 physicists, engineers and computer scientists from 182 institutes and laboratories in 42 countries. It will involve a survey of CMS members accompanied by interviews of a subset of the collaboration. It will cover scientists’ definitions of “outreach”, incentives they receive to be involved in outreach, whether they have been influenced by funding agencies’ calls for more outreach, what barriers they face (internal and external) in participating in dissemination efforts.

A key matter left unanswered by previous studies of CERN concerns the public's expectations from outreach activities. This question will be addressed by conducting surveys of some of the thousands of people who will visit the CMS Experiment in the next few years.

The outcome of this research can potentially guide the outreach policies of CMS and CERN by recognising the support that needs to be provided for sustained engagement; identifying any barriers, both perceived and real, that prevent scientists from participating in dissemination activities; and comparing the expectations of the intended audiences with current outreach efforts.