The UK Government took a global lead in developing an online service to allow the public to compare their door-to-door transport options. UWE Bristol’s expertise in understanding travellers was central to the design and subsequent use for planning millions of journeys.

A vision from the Prime Minister

When what is now the Government’s Department for Transport (DfT) was instructed by the then Prime Minister Tony Blair to create a new resource to support travellers, UWE Bristol’s Professor Glenn Lyons was among those they turned to for advice. Blair’s vision was for a service akin to NHS Direct that would, in the dawning digital age, make people aware of the travel options available to them, inform their choices and make it easier for them to plan and undertake their journeys.

The challenge for the Government was assembling the capability to turn this vision into reality – not something it could have achieved with its own civil service staff alone. So, in 2002, it brought in key external experts to form an ‘expert client team’ – and Lyons became its only academic member.

Lyons was appointed in 2002 as UWE Bristol’s first transport professor, and founded UWE Bristol’s Centre for Transport and Society. With colleagues there, he continued to pioneer research into the emerging role of the web in providing travel information. This led to new insights into how best to bring together and present information on different forms of transport, such as buses and trains, in ways that would help people’s travel plans and influence their travel behaviour.

For example, his research found that, contrary to the received wisdom, the availability of travel information did not drive use of public transport. Instead, public transport itself would need to be marketed, and then people would look for information about how to use it.

How would Star Trek’s Mr Spock differ in his travel planning from Homer Simpson? This distinction between ‘homo economicus’ and ‘homo psychologicus’ turned out to be a simple but powerful way of picturing people’s complex behaviour in making travel choices. It was conceived by Lyons and proved influential in the DfT’s thinking.

During his involvement with the DfT, Lyons devised and presided over a programme of research projects to support the delivery of the new information service.

Shaping a new service for the public 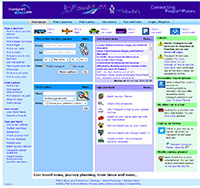 Research at UWE Bristol was significant in the development and subsequent use of Transport Direct. UWE Bristol findings on how best to maximise the usability of information led to major changes in its design to take greater account of the needs of real people, notably those with disabilities such as dyslexia.

UWE Bristol input changed the service’s priorities. The initial approach was focused on encouraging people away from private cars and towards public transport. Lyons helped to shift the objective instead to one of empowering people to make informed choices, regardless of whether that matched any preconceived outcome.

"Without Glenn Lyons’ input in the early development of Transport Direct, it would have been driven solely by policy rather than by the needs of ‘real people’" .

UWE Bristol’s finding that promotion of public transport itself drives demand for information about it shifted the emphasis away from marketing the service directly to the public. Instead, it moved towards encouraging third-party organisations to use it with their own branding. Even so, there is evidence that its neutral presentation of travel information influenced more of the travelling public towards public transport than away.

Insights from UWE Bristol research helped guide the service through its complex journey from conception to reality. In full operation it covered around 100 billion journey combinations. During its lifetime Transport Direct handled over 160 million travel information requests.

The service was ahead of its time. Having given significant impetus to national information provision it has now stepped aside to let other players in the market to pick up responsibility.

The effectiveness of Transport Direct did not go unnoticed in the rest of the world. It has influenced the Dutch national online journey planner, and a US telephone and web resource for transport in the San Francisco Bay Area. For the London 2012 Olympics, Transport Direct was selected to provide the bespoke online portal that guided ticket holders to and from the venues of the Olympic events. This ‘Spectator Journey Planner’ had 2.75 million unique users.

The influence of UWE Bristol research has therefore grown from its major benefits to the UK travelling public to helping people around the world.